To create and maintain an on line resource dedicated to the research, acquisition, restoration and preservation of vintage sound recording devices, their inventors, manufactures, engineers, documentation and history. The Museum will also serve as an educational resource for those interested in the sound recording industry and its impact on music, broadcasting, film/video and science.

It was the Museum's original intent to create a permanent public museum facility in Austin, Texas. However after five years working hard to create a museum facility, we found there was not sufficient support to fund our museum. For this reason the "non-profit" status ended December 31, 2017.  The core of the Museum's collection is the magnetic sound recording devices and their tremendous impact on sound recording from 1935 through the 1980's.

Web content will continue include the history of all sound recording from the 1800's to the present, including information on analog, magnetic and digital recording processes.

This is the design draft by our Board member and architect Lloyd Cates. In the Spring of 2015, University of Texas third year Architectural Interior Design students also completed 11 independent designs for our Museum. We were very disappointed it was not possible to pursue the facility. 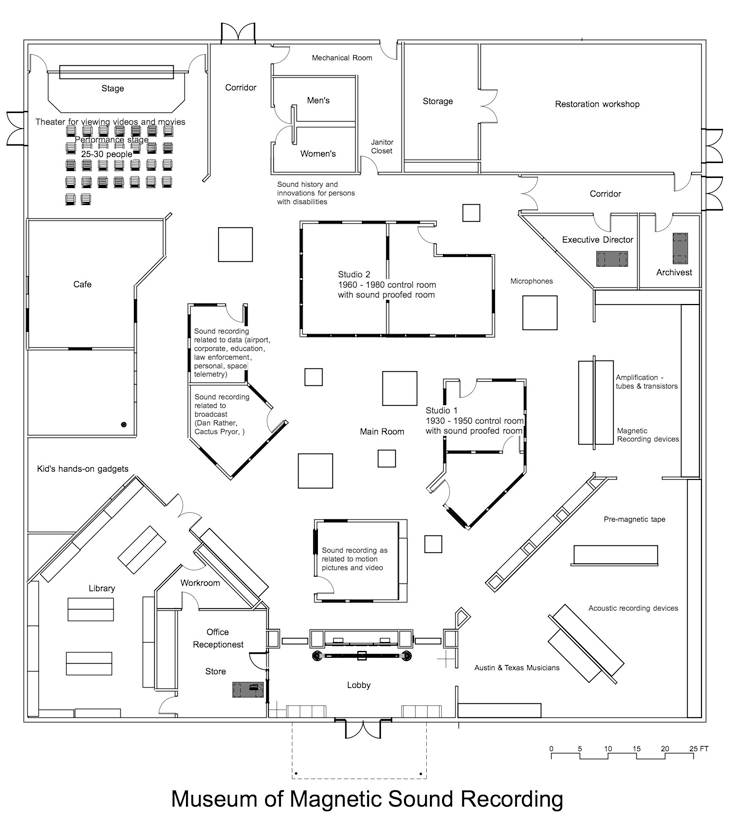 The need for a permanent public sound recording museum continues:

The more information we gathered about a permanent location, the more the project took on a life of its own. We discovered a variety of museums that have various technology displays, including the Grammy Museum, the Rock & Roll Hall of Fame, the Pavek Museum of Broadcasting (which is open only part time). However, we found no public museum that preserves and makes available not just the sound technology, but other related vintage media collections as well.

There is no one museum solely dedicated to the development and display of devices of acoustic and magnetic sound recording.  In the US, there are numerous collections and museums based on memorabilia of famous recording artists, some of which include one or two recording devices, however none with this sole purpose.  There are museums that celebrate the history of broadcasting and television, however the displays include few reel to reel tape recorders.  The Theophilus collection of 200 reel tape recorders is one of the larger collections in the US.   The Theophilus collection was initiated in 1998 and in addition to the 200+ reel tape recorders and 100+ microphones the collection includes some 20,000 pictures and documents in the on line museum which is free and receives 1.8 million hits per month.  This collection is  also unique in that it not only can demonstrate actual working recording devices, the collection also includes extensive documentation and is displayed in a recording studio setting with related historical artifacts.

Many folks today are not aware of the significance of magnetic sound recording and that it enabled the recording capabilities we enjoy today. . The engineers who invented and built the devices are fewer and fewer. Unfortunately many of the magnetic sound recording devices are slowly disappearing. We receive offers from families daily who are cleaning out parents and grandparent's possessions and offering us old devices. We no longer are accepting donations as we are out of room. Other than eBay, we have little to offer the families.

The first magnetic tape recorder was created in Germany in 1934.  The majority of the world's magnetic tape recorder companies came into existence post World War II.  John Boyers, the last remaining founder of one of America's significant tape recorder manufacturers, Magnecord Recorder Company, passed away the end of September 2012.  Robert Metzner,the founder of Roberts Recorders/Califone/Rheem passed away in 2013.   Like WW II veterans, we are losing the significant folks in this brief period of sound recording history.  Their information needs to be documented and recording memorabilia archived.  The devices themselves began being discarded in the 1980’s.  There are still numerous units, many with significant historical value that can be saved from our landfills.

We'd envisioned Austin being a perfect location for this museum, but were open to other locations. Chris and Martin Theophilus were part of the Austin MusicBusiness group that came up with "Austin, Texas, Live Music Capitol of the World!" Unfortunately many of the classic venues that enabled that slogan are gone. Forced out by higher leases and a lack of commitment to save one of the prime reasons folks were attracted to Austin. 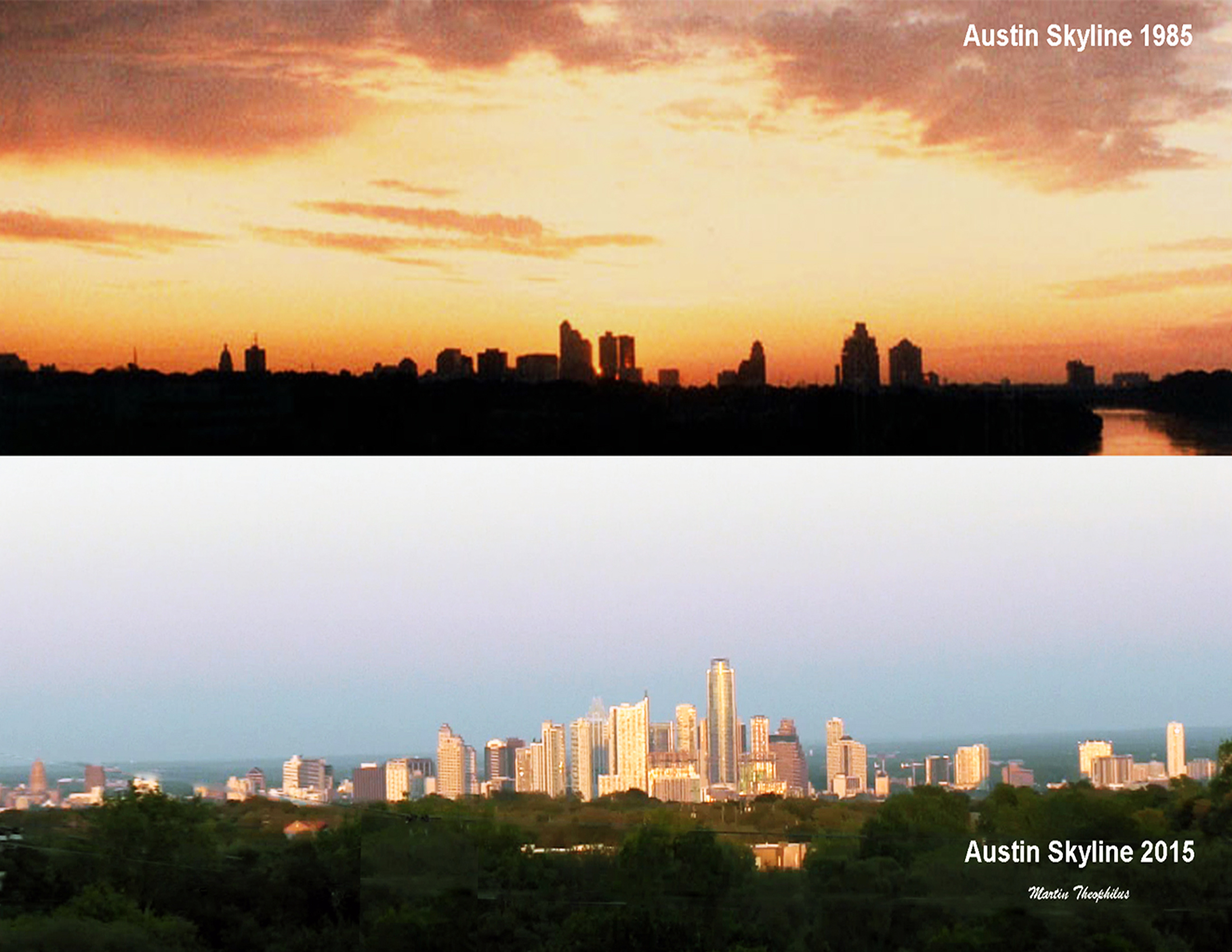 Sound recording encompasses broadcasters, educational institutions, film, video, science and all forms of media.  Interestingly the very first known sound recording occurred in 1857.  That recording had no means of replay.  It wasn't until 2008 that technology enabled the recording to be reproduced. It turned out the be the French folk song "By the Light of the Moon."

Music recording has driven many of the innovations in magnetic sound recording.  Austin, Texas is the "Live Music Capitol of the World" and draws hundreds of thousands of visitors specific to the music and recording industry through South by Southwest (50,000 attendees); The Austin City Limits television series; the Austin City Limits Festival (70,000 attendees a day for 3 days over 2 weekends) and numerous other events.  This provides the perfect setting for folks interested in the history of sound recording to tour the Museum of Magnetic Sound Recording. However, we received no concrete support from the city, universities, organizations, developers and others we approached. There was a great deal of verbal support and when we pursued grants, letters from significant sources were provided. In the end no viable situations were secured.

So we are continuing the collection with the online web sites indefinitely. Once all the collection is totally updated, we plan to retain some core items that are significant to the history of sound recording and the rest of the collection will be sold. The videos available for download will also be updated and will continue to reflect our ongoing efforts in preservation.