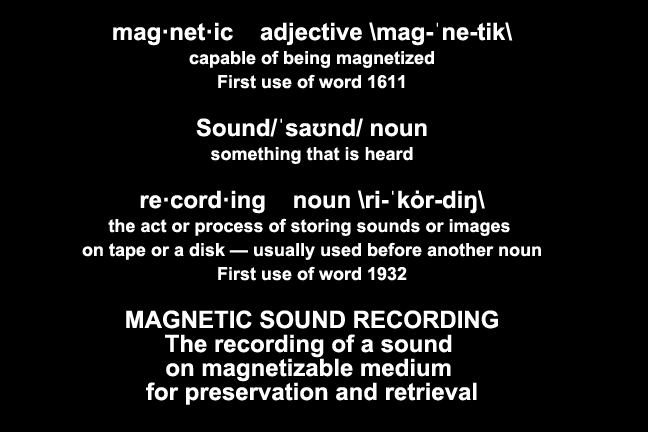 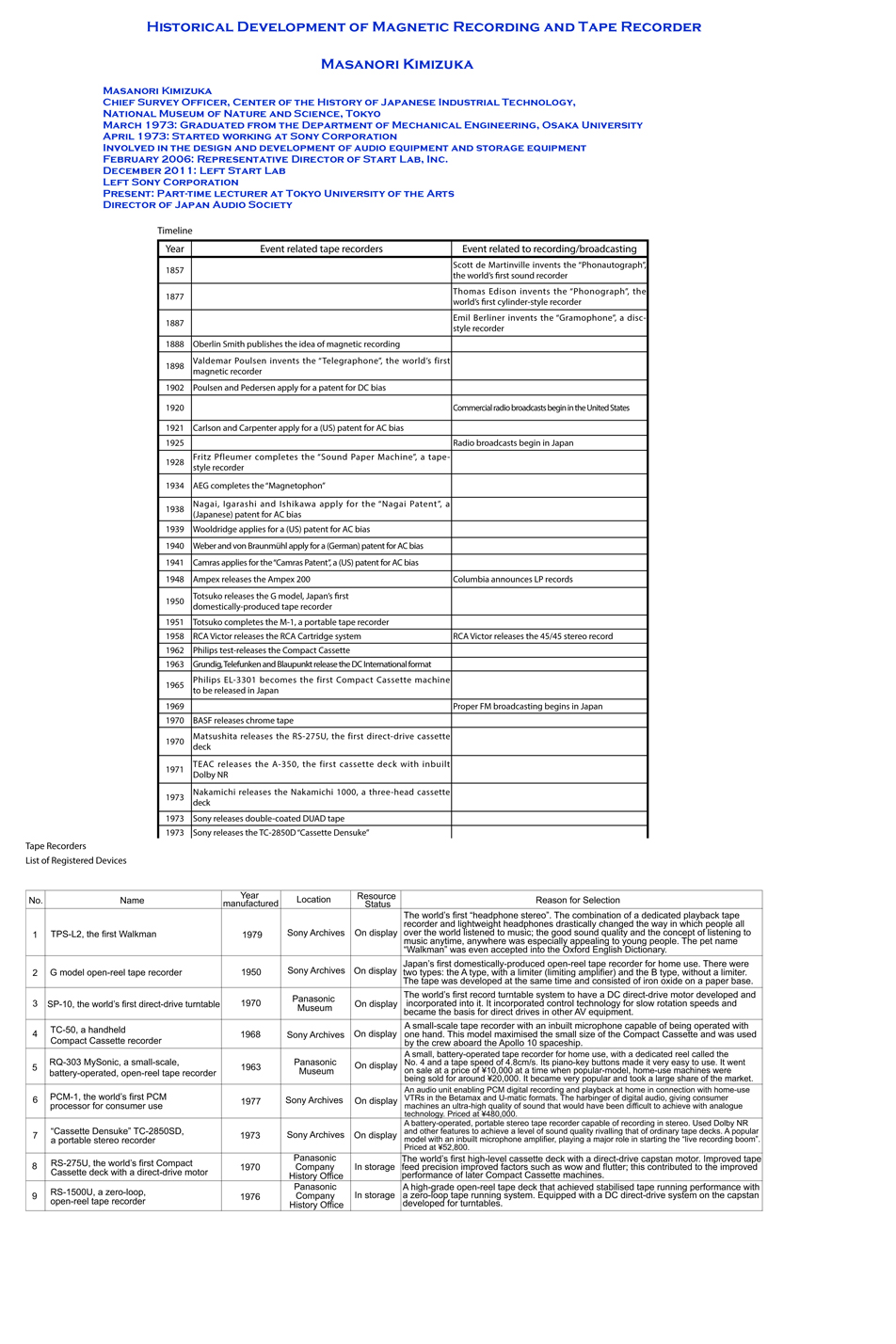 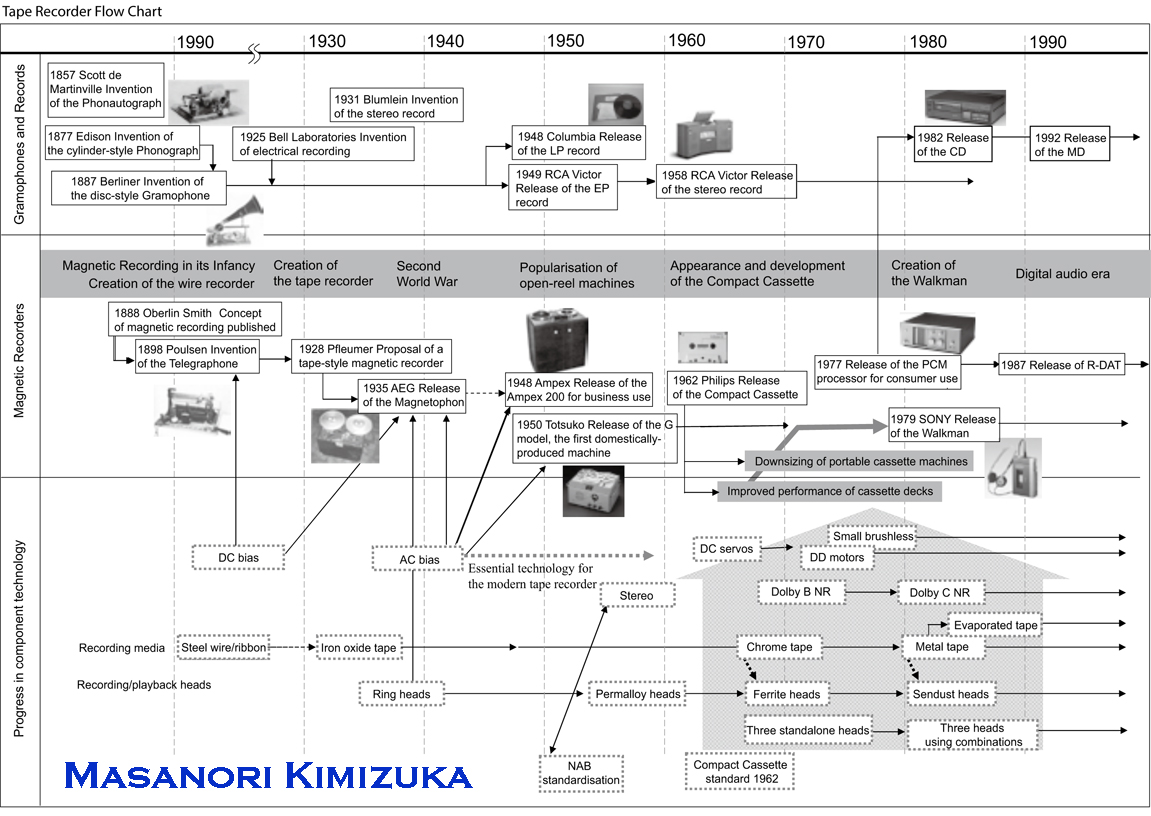 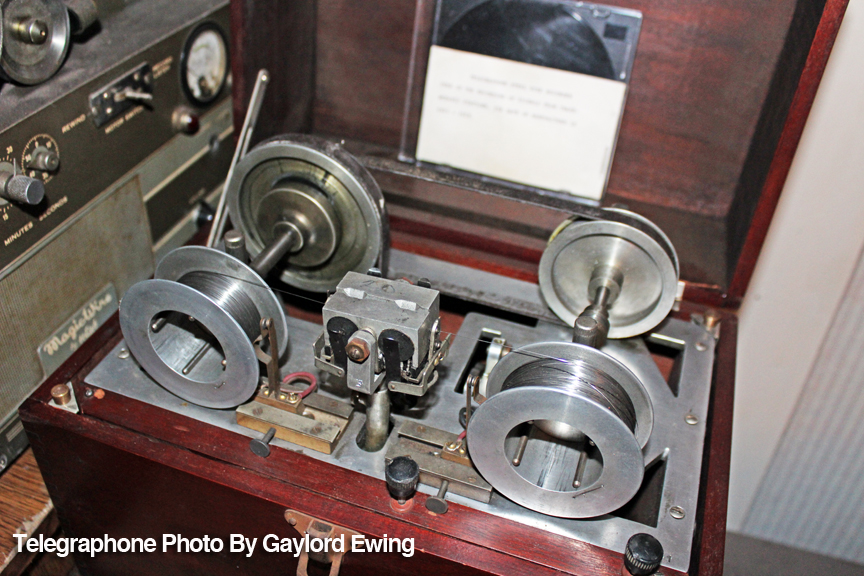 Today sound recording is pretty much taken for granted.  A smart phone can capture very high quality sound. Touch a 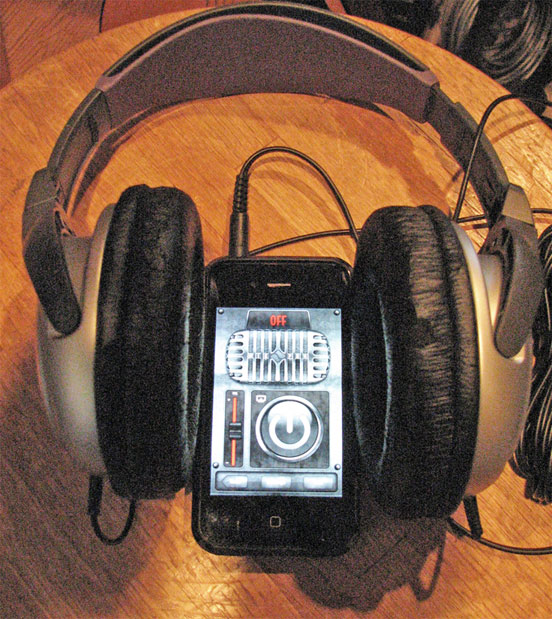 screen and instantly sound is recorded...video too!  It's interesting that the phone became such a good sound recorder, because in the late 1890's it was Valdemar Poulsen, a Danish engineer who developed a magnetic wire recorder in 1899.  Why?  To be a device to take messages from the telephone.  Telephone answering devices and dictating recorders drove the early wire recorders, as well as Edison's cylinder recorders & players.

From Paul: "Martin, Hope all is well? I was working in my garage in what my girls refer to as the Rich Archives, Ha! ,and came across a few of the negatives I took back in 1984 of the recorders I eventually sold to Ampex Museum there in California. ...The first two photos is of the Poulsen Disc Recorder #13, as stated on the original brass plate mounted on the top surface. There were two approximately 5" steel disc as part of the collection. I never tried to operate or plug in the recorders in fear of damaging a rare piece. Just loved looking at them. 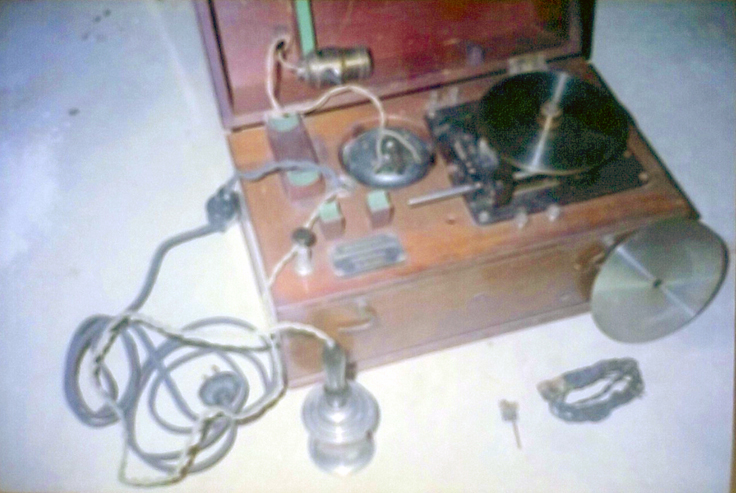 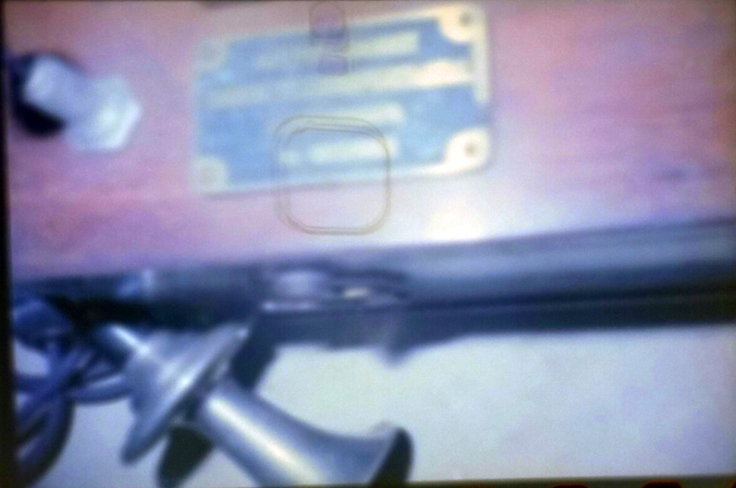 The other two photos show the American Telegraphone Company wire recorder prototype with lid that still has the lightbulb mounted inside the center for continued work by the inventors. I have a healthy amount of original photos and documents showing them with this item. The wire recorder was enclosed in what appeared to be a wooden sewing machine box. Must have been readily available back then. Sometime later after sale I received the original phone like handset, very ornate. Sometime when I'm able to locate it I will forward photos." 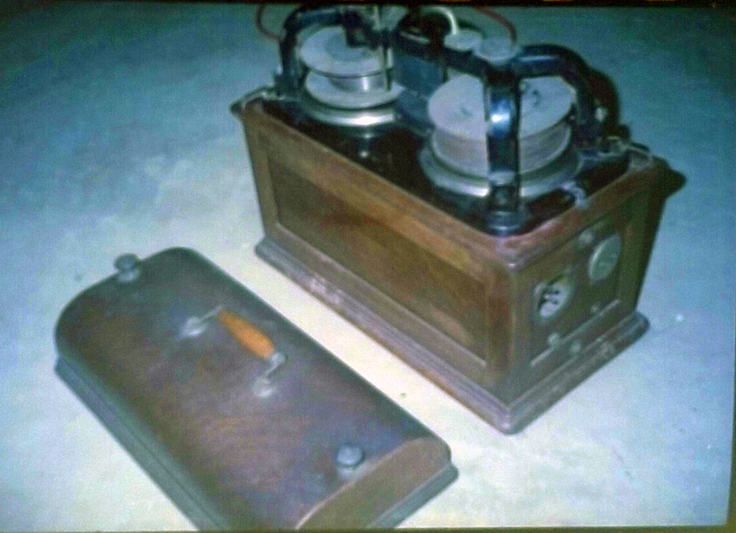 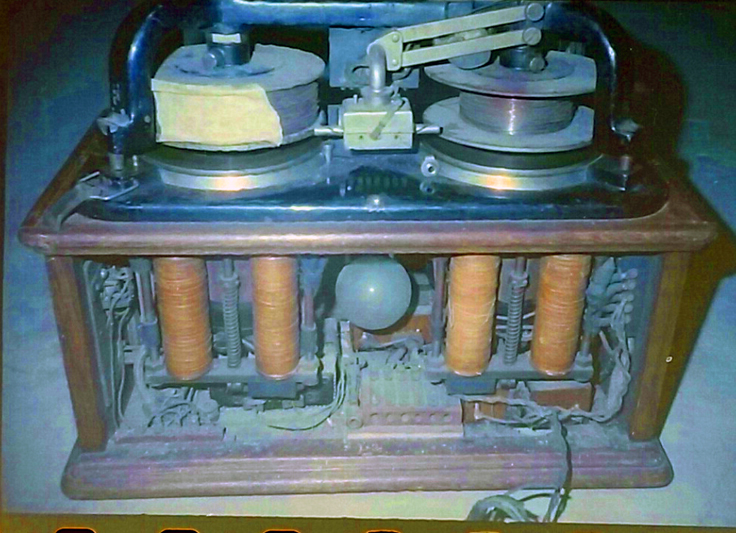 Go to more about Valdemar Poulsen

These devices captured sound using vibrations and were available to the public who mostly used them to play back music.  Prior to WW II, the wire recorder and the vinyl records were all folks had, although there were innovations in optical and movie sound recording.  These devices were definitely not readily portable. 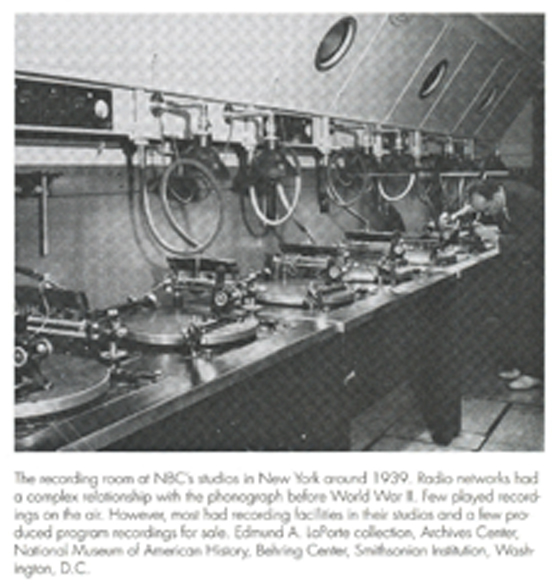 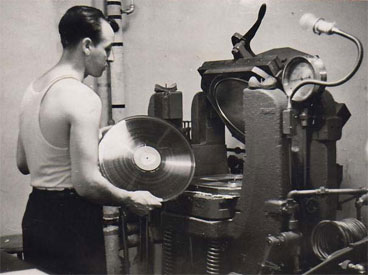 In the 1930's & 1940's the technology of recording direct to a vinyl record had produced some very high quality sound recordings.  The down side was that the only method available to edit out a mistake, was to either start over, or copy a selection to another vinyl record resulting in a loss of quality. 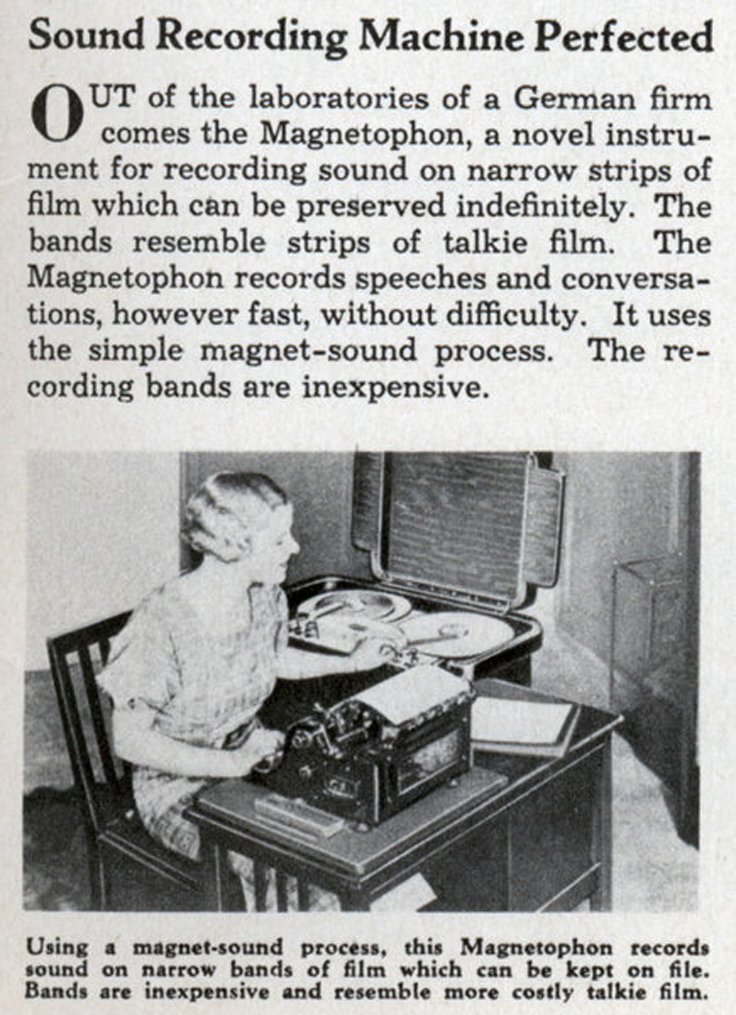 In 1933 this all changed.  German engineers with AEG created a magnetic reel to reel 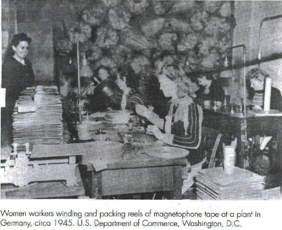 Here's an interesting article about capturing sound during WW II.

After WW II the technology began expanding all over the world.  The key components were: tape could be edited without a trace of a splice; tape could be copied with little loss of quality: and tape could be erased and reused over and over.

It was the Baby Boomers who first realized the benefits of the magnetic tape technology.  While recording studios had professional recorders, smaller and very portable reel tape recorders were available beginning in the early 1950's and evolved into the 1960's and 1970's.  Before the Sony Walkman, there were many 3 inch, 5 inch and 7 inch tape recorders, which allowed you to record and playback sound anywhere.

Next came multi-tracking first developed by Les Paul.  This evolved into 4, 8, 16, 24 & 48+ track recorders.  This was a very exciting era for sound 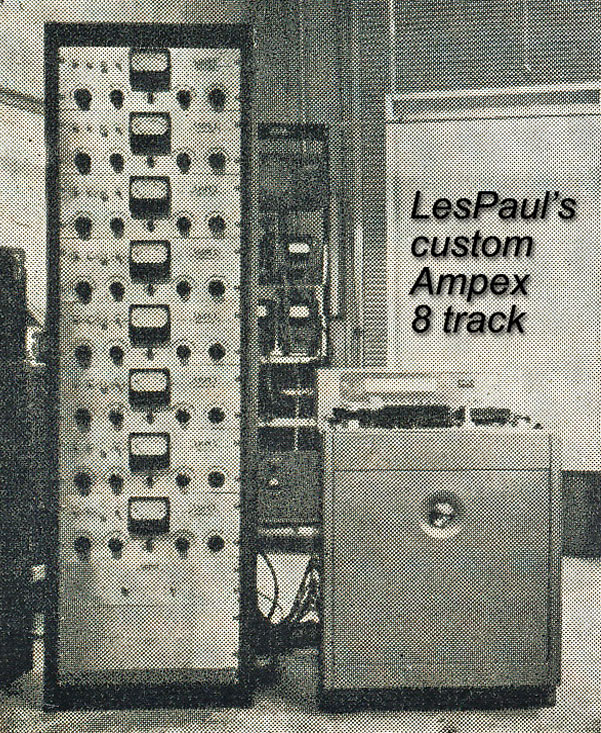 recording.  Recording engineers were experimenting with all types of special effects. Tape recorder manufacturers were incorporating the innovations into new products with hundreds of models being released every year.  In 1962 the 1/4 inch tape had been reduced to 1/8 inch by Philips and loaded into the compact cassette format.

The magnetic sound recording technology began and enabled the digital technology.  In 1967 the first digital audio magnetic tape recorder was developed and by 1982 the first compact discs (CDs) are marketed by Philips and Sony.  The reel to reel analog open reel tape recorder quickly passed into history with only a few professional models continuing to be produced.

So there was this wonderfully magical period of discovery and innovation of magnetic sound recording that basically went from the early 1930's to the early 1980's.  This is what the Museum of Magnetic Sound Recording web site is ABOUT! The Museum will preserve these unique magnetic recording devices by: researching and documenting their history; and making the information available to the general public.

While based initially on the reel to reel, or open reel analogue tape recorder collection owned by Theophilus/Reel2ReelTexas.com, the museum will also be representing other areas of sound recording techniques throughout history.  Unfortunately, the museum is only available on line at this time.